Transplanting to our Garden 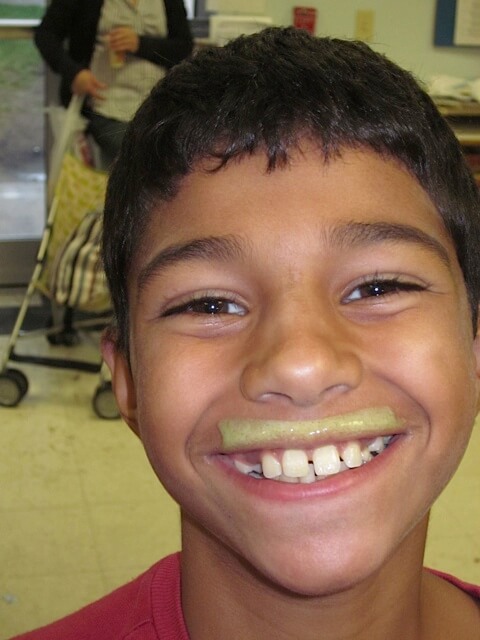 “It tastes like a rainbow!” exclaimed 9 year old Carlos. His smile, framed by a green mustache from his freshly-made kale, strawberry, banana smoothie, broadened in delight. “Think it might be good with spinach too?”

Carlos and his family lived in Mystic Public Housing, a low-income housing development with a great after-school program. With limited funds, they relied on cheap, starch-based foods to keep them full, but not energized.

“I was always tired so my mom took me to the doctor,” Carlos explained. “When the doctor told us what was wrong, she couldn’t stop crying.” The pediatrician discovered that Carlos was pre-diabetic and was at risk for developing type 2 diabetes. Fortunately, Carlos attended Real Kids Real Food at the Mystic Learning Center for one hour a week. There he got the chance to learn how to prepare food while playing games and expanding his understanding of good nutrition.

“You should see the things I can make now!” Carlos says proudly. “Linguini with marinara sauce is fun—especially making the noodles out of zucchini.” When it was most vital to his health, Carlos learned to love preparing fresh healthy meals, coming home from Real Kids Real Food each week with nutrition tips and recipes, eager to expand his family’s knowledge of healthy eating. Together they learned how green vegetables could help change his prognosis and where they could procure affordable or free vegetables.

Three months later at his next doctor’s appointment, Carlos heard the good news. “All my tests came back clear, and the doctor said I was really healthy!” Carlos beamed. “My mom cried again, but because she was so happy this time.”

Carlos’s success resulted from his mother and his participation in the Real Kids Real Food Program at the Mystic Learning Center in Somerville.  This year’s program, funded by The Staples Foundation, Real Kids Real Food Pre-Teen Program – A Fight Against Obesity and Diabetes in Children directly impacts the reversal of the shocking national trends towards obesity and childhood diabetes. In its fifth successful year, 40 Pre-Teens (ages 8-12) and 20 of their will enjoy hands-on activities regarding nutrition, local and organic food, gardening, grocery shopping, planning and preparing meals, with the ultimate goal of learning how to achieve and continue an overall healthy lifestyle. The program broadens their exposure to making healthy choices with attention to affordability and incorporates physical activities and parent involvement throughout the year. OHS has piloted this program in other public housing environments with measurable success.

They had eaten guacamole before but none knew how to make it. Squeezing the lemon was a big attraction. especially after it was suggested that putting the lemon half on the opposite position, not quite according to the design of the lemon squeezer, would get much more juice to come out. Marcus Gorman and Lisa Santana read the book “Fruits I love,” by Valya Boutenko. On the stage on the upper floor of the old church that is today the Elizabeth Peabody House, the children divided into groups of six.

Each group planned and then dramatized all parts of the process of seed germination to show how plants grow. One narrated while others played the parts of a seed, earth, rain, sun and finally growing sprouts and bearing fruit– — something just learned from Betsy Bragg, Brian Axelrod, and Marcus Gorman.

Downstairs, each child received three kinds of seeds that they had chosen the previous week and planted them in organic pellets. They made markers for each of their plants with their name and that of the plant. Placing them under the grow-lights, they learned to water them — not too much — to make sure the seeds would be able to start to germinate and grow. They started journaling their observations of the germination process. The children said they liked having their own plants and were excited to see them grow.

With the little plants set aside, they washed their hands and put on latex gloves to create B.A.T., the snack of the day: banana-tahini with apples, a recipe from Karen Ranzi’s book; “Creating Healthy Children”. They learned the history, nutritional value and how and where sesame seeds grow and the origin of saying, “Open Sesame”. Putting the soaked sesame seeds in the blender, they prepared tahini and added a spoonful of it into their bowl of mashed banana. Then they added sliced apples made with apple cutters. While enjoying their snack, they listened and then discussed the books: “ From seed to plant” and “Living Sunlight-How Plants Bring the Earth to Life” And the plants did grow!! WOW! Not bad to start the day looking at the fruits of your labor, so to speak!

The little seeds did not disappoint and while some grew a couple of inches, at least one shot up in the air, in an amusing difference!

After a special time doing yoga positions, such as tree and sun, the youngsters sat down to learn about the importance of the soil for the plants. “Can we use the soil from outside?”, asked one boy. He learned that the best option would be composted soil.

Compost is made from the leftover peels and seeds and all kinds of vegetables or the parts of the vegetables we don’t usually eat. If treated carefully and often mixed with chopped up fallen tree leaves, it becomes wonderful dirt, filled with the nutrients that are rich in life-force that will be transferred to our bodies.

One big attraction on this day was to compare three kinds of soil: sand, dirt, and compost. OHS arranged to have the hard dirt removed from the EPH gardens and replaced with organic compost.

The youngsters took a special interest in looking at and comparing the soils with a magnifying glass and touching the compost, why not? With their hands into it, they learned how the special composted soil must have just the right amount of water to feed the plants. They squeezed it in their hands, as taught by Dave Anick.

A little later, with hands washed and properly gloved, they created their real food snack for the day: “Ants on a log,” preparing their own walnut butter in the food processor, spreading it on bananas and covering them with raisins. Yum!

Story telling afterwards had Rachel. Plitch, reading “The Little Mouse, The Red Ripe Strawberry and The Big Hungry Bear,” by Audrey Wood. to the Kindergarten & First Graders. Rachel from Shape-Up was there to bring boxes of produce to parents for only $7.00 As if planned by the organizers, the sun came out on cue and the spring temperatures made it simply perfect to welcome our real-foodists to the outdoor garden.

Under the leadership of Brian Axelrod and Dave Anick and with the help of EPH staff members, the lesson on how to bring your young plants to a place where they will get sunshine and rain became much more clear.

There was no shortage of enthusiasm, as the children placed their small plant containers directly into the beds prepared with compost.

Once all was done, they helped to unwrap the mesh wire to make special fences to keep away the small animals who might also find the garden appetizing.

And then it was time for QI Gong, a Chinese-type exercise, where they imitated the movements of different animals.

Back inside, the snack was never so great! Divided into two groups, they made a salad dressing, mixing olive oil, lemon, honey and Nama Shoyu, which is a raw soy sauce that gives a great taste to greens. Then they poured it over cucumbers, tomatoes and sunflower sprouts, which they tried for the first time and seemed to really appreciate.

So, a salad now became a very new concept: no lettuce, but a large number of sunflower greens was what they tested. And loved!